Anything that's on topic but doesn't fit elsewhere, including related events that might be of interest to quizbowl players.
Post Reply
10 posts • Page 1 of 1

If I have this in the wrong place, I will trust that the Mods will move this to the proper location.

It is with a heavy heart that I report to the Quizbowl community the passing of David Riley.

David's resume is extensive. Primarily, David was the quizbowl coach at Loyola Academy in Illinois for much of the 1990s and 2000s. In Illinois, he was president of the Illinois Scholastic Bowl Coaches Association (IHSSBCA) for a time, served on the Coaches Association Steering Committee for many years (including up to the time of his death), and served for two terms on the IHSA Advisory Committee. David was a long time moderator, and worked at a handful of HSNCTs, even after being confined to a wheelchair. David was a long time coach of Team Illinois which represented the state at Panasonic and later at NASAT. David was the head coach for one of Illinois' two Panasonic championship teams. More recently, David worked as a member of PACE, only resigning his position when it became clear to him that his health would not allow him to continue. At Loyola, David hosted a frosh-soph and varsity tournament for many years. Starting back in the era when Panasonic's tournament would host Team Illinois, David started the Ultima tournament which hosted the best teams in Illinois (that tournament later continued without the Panasonic format, adopting the greater national format). David also helped guide the start of the Loyburn tournament which Loyola would host in alternating years with Auburn HS in Rockford.

For those who have been around long enough, they will remember a time when Illinois was the backwater of quizbowl, while today Illinois can boast one of the largest annual contingents at HSNCT, in addition to routinely placing teams into the top 10. David did not create this change singlehandedly, but David's voice was among the loudest demanding that Illinois change its ways and join the greater national community, heralding in an era where good questions went from novel to the norm, and convincing other coaches that this was the way to go. David was really one of the first Illinois coaches to reach out beyond the state's borders. While it was easier for old folks to ignore kids, David, who came across as a old-time curmudgeon was far more difficult to dismiss. I don't want to overstate David's role here, but his role was significant in changing how Illinois philosophically approached quizbowl.

For his work, PACE awarded David a share of the 2012 Benjamin Cooper Award (shared with fellow Illinois coach Linda Greene). In 2011, he was inducted into the IHSSBCA Hall-of-Fame as a part of its seventh class. In 2014, in honor of his life work in supporting students, particularly as a quizbowl coach, organizer, and pioneer, Steve Beshear, Governor of the Commonwealth of Kentucky (David's home state), awarded him with a commission as an honorary Kentucky colonel.

David was very well read (as most librarians tend to be). One of his degrees was in music, and his knowledge and love of music was extensive (he loved opera, but he also loved girl bands ... go figure). He was a gourmand who particularly loved Hungarian cuisine. David was exceptionally tolerant and open minded, and embraced all those who sought knowledge, and very much enjoyed taking students to their first opera or to see a museum they had never seen before. While his loss will be felt most among his former players, his loss will be felt much further. His support for players across the state in those years that Illinois took those tentative first steps toward becoming a respected quizbowl state is incalculable.

David had been in declining health for the better part of the last ten years. Toward the end he was rallied by many people, particularly in the quizbowl community who sent support. Last night, some of his Loyola colleagues even put on an impromptu concert for him, and he briefly regained the strength to sing along in German. He was only briefly awake in the past 24 hours, but he was never long without company and the sharing of notes from friends near and far wishing him the best. I can confirm that he died peacefully in a deep sleep after receiving many visitors over the past few weeks. While his loss is certainly sad for all of us, I am grateful that his physical suffering is finally at an end. All in all, he died well.

If you wish to honor David, pop in a CD of some classical or operatic music (if you have the Supremes, that'll do too), or pick up a book you have never read before and start reading, or go find a museum you haven't been too, and go visit it to learn something new.
Thomas Egan
Top

This is very sad news; I hope some time, however brief, could be found to honor him at one of the national quizbowl tournaments this year.

Also, he was a Colonel! Why did I not know that?
Mike Cheyne
Formerly U of Minnesota

My only real interaction with David was a few years ago when he volunteered to help with a project I was working on for PACE. Even in a half-dozen emails and phone calls, he was remarkably generous; from everything I've heard about him, that's how he always was. I'm very sad to hear this news.
Andrew Hart
Minnesota alum
Top

Personally and professionally, every interaction I had with David as a coach, as a moderator, or as a constructive critic was very rewarding; he was a wonderful source of information about a wide variety of things, and he will be greatly missed.
R. Robert Hentzel, Chief Technical Officer of National Academic Quiz Tournaments
Top

While I don't think I ever met him, David was always willing to give some advice to Kentuckians who were trying to make the quizbowl scene in his home state better, and several times posted with advice in the Kentucky threads on these boards. He once suggested that we should look into starting a coaches association similar to what exists in Illinois. I thought it was a great idea, and while things changed a bit, eventually the Kentucky Quizbowl Alliance was born.

Quizbowl has lost a valuable and important member of our community.
Nicholas C
KQBA member
Top

David was by far the friendliest, warmest, and most approachable adult I've encountered in my time with quiz bowl. I always got a kick out of his stories at tournaments; one was when his music professor in college essentially freaked upon finding out David could easily play major tenths on a piano with one hand and had to admonish him against throwing them willy nilly in his arrangements because almost nobody else could. He was cultured in a way almost never seen in this day and age; I don't think I've ever seen anyone draw as much interest about his culinary exploration on Facebook without needing to post pictures. I'll miss him.
Adam Sperber
Hickman '10, Northwestern B '14

I will miss him. I had the pleasure of meeting him on several occasions, both as a player, and as a moderator. He brought an undeniable sense of professionalism to the game.
Peter Chmiel
Former Station Middle School Player (2011-2014)
Barrington High School Player (2015-2018)

"You are hereby charged that you did, on diverse dates, commit heresy against the Holy Church'"
-Cardinal Fang
Top

What the teams at the Loyola Ultima XVII are competing for today: 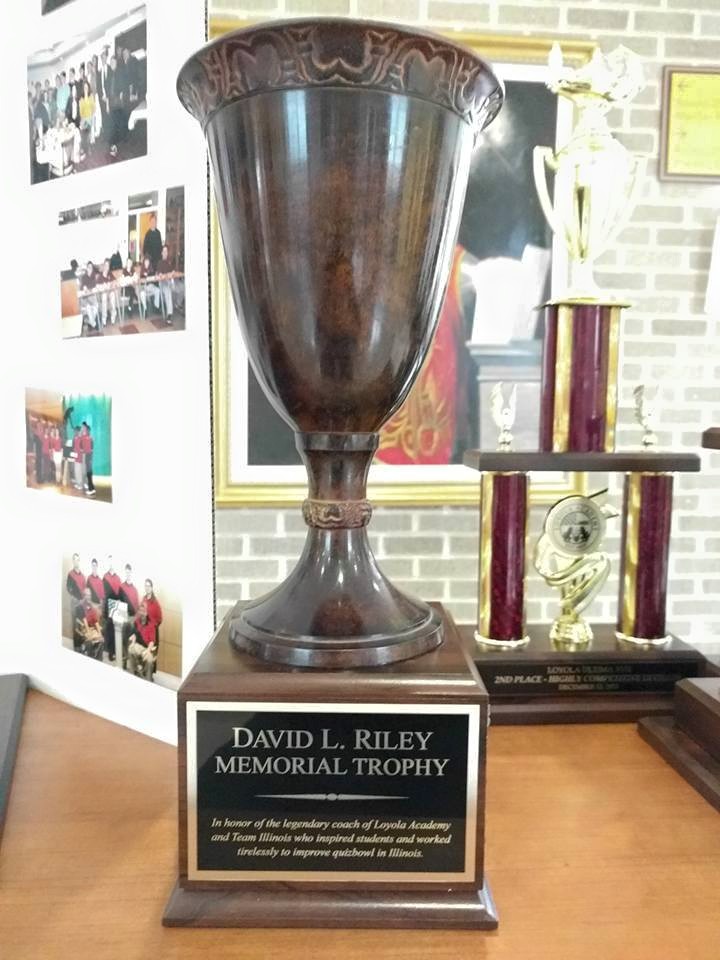