Study up on White Iverson and the Miley Cyrus "23" song

Re: This Time, A Stern Warning

In any case, I think that it would be a very bad thing for the community if self-appointed vigilantes were to continue leveling accusations that we have to take on faith, because not even the director of the affected tournament is allowed to see the supposedly "damning" evidence. Clearly ...

Re: Top 25 History Players in the City of Chicago

Just for the record this is definitely wrong, Loyola was so bad at history that when Dave Madden asked us whether we wanted to come to NHBB nats Nolan laughed at him

Re: "buzzer faking", this rarely if ever works and can be considered pretty rude (both because it's angle-shooting and that you're insinuating the other team is naive or impetuous enough to fall for it). There's very little reason to try, unless you have a good existing relationship with y...

Guile Island wrote:someone who knows old things and wants to win play this with me pls

Dylan, let's do this.

Re: No Banter Please - A Trash Tournament

I for one welcome the new 30 question distro

Re: Public discourse, on the forums and elsewhere

Speaking as a former bright-eyed high school student from the Weinerian era, I had a quite negative impression of the community from some of the exchanges I saw on the forums, which contributed to my decision to step away from the game for my first couple years of college. While I think we've improv...

Re: Your Favorite Question

Definitely the 2013 NASAT tossup on parties in Pride and Prejudice which led to me buzzing in and excitedly saying "Like... Darcy's balls?!"

Re: Quizbowl men, get a haircut


have you met this charlie dees fellow

DumbJaques wrote:(with apologies to the Chuck Berry enthusiasts, that seems like an awfully niche thing to bump Tricon for)

Yeah, wouldn't want a tournament as niche as rock music to get in the way of the many fans of 1970s fads, US cities with population less than 50k, and numbers greater than 100

Mewto55555 wrote:We throw one of Kai's rare pepes off the ferry. Say goooodbye to Exooooodia!!!

*the other of course referring to alston's

this was my joke go back to danganronpa dear

heterodyne wrote:Max exclaims "An all time classic!" while turning up the radio. Dead and Gone by TI begins playing.

to be fair, he's right

Re: The ol' Nationals Cracker Barrel

Can Dylan do better than his NCAA team did??

Re: (This) Tournament is a Crime detailed stats

i.e. the lack of ACRONYM stats?

User was warned for requesting stats multiple times within a week.

Re: (This) Tournament is a Crime detailed stats

but where are the detailed ACRONYM stats

Re: Packet Sub: Things you liked in high school

(jk I'll put something together)

John and Max are, you might recall, not the same person.

Really?!?! A recent survey by Ike Analytics found that 69% of QBers find JL and Max to be the second-best shipping.

Shorts are comfy and easy to wear wrote:

The Top Percentage of Rattatas wrote:

I sense a conspiracy

Ike wrote:This was a lot of fun - just a reminder that quizbowl is a lot more fun without that biology crap.

Sid I saved you

This was a ton of fun. The format was really unique and brought a lot of variety and exciting moments to the weekend. Thanks so much to all the writers and to Michigan for hosting!

Habitat_Against_Humanity wrote:So the as-yet-unnamed team of myself, Sara Burke, Sam Bailey, and David Seal has lost its David Seal to work commitments. Are now looking for a free agent. Sports knowledge a plus. PM me or something.


Not every Chicago Open Trash team can afford him

considering there's only two packets and probably not that many people who want to play would it be easier to just run a shootout format?

Steeve Ho You Fat wrote:While I fulfill 50% of those requirements, unfortunately HiiiPowers has no free roster slots.

Jake, build your own pyramids, write your own hieroglyphs

Craise Finton Kirk Royal Academy of Arts wrote:Do note that our PPB at Missouri Open is a bit inflated, since Morgan Venkus jumped on board our team making us an open team. Morgan is not enrolled at Northwestern, so he won't be playing any tournaments with us.

One thing that helped me a lot in biology and chemistry courses was to visualize things - if you try to find videos on the krebs cycle, bonding, etc and draw out the diagrams in your notebook, it helps a lot more with conceptual understanding

Re: Missouri Open Mirror at MSU

chris ray when is your mixtape dropping

Re: Missouri Open Mirror at MSU

Uh so where/when is this happening tomorrow?

minor issue I had while reading: the Iliad bonus says "Chryses" (the priest) when it meant "Chryseis" (his daughter and Agamemnon's war prize at the beginning of the Iliad)

heterodyne wrote:Auburn returns the far and away best player in the state. Depending on his improvement, Auburn could be the best in the state by the end of the year.

"Welcome to indiana. We don't like it any more than you do."

7:35: "Did you know that twice as many accidents happen to people going a given amount under the speed limit as above?"

pray for us pls

"Streetlight manifesto... is that related to giacomo balla?"

7:17 Mike sorice informs us that mcdonalds will not let you get non integral amounts of hash browns since employees won't be able to figure out what pi hash browns is

"Yeah, I'm just making them wait because I'm a dick."


He then chugs the shit out of a mug of coffee 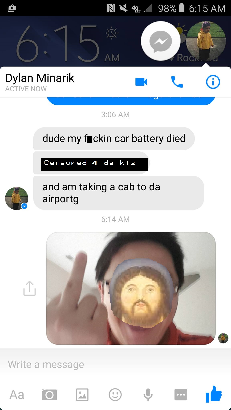 Hello, I am an unidentifiable figure who has hijacked Morgan's phone, and now partially this thread, which shall now contain information about Mike Sorice's trip to the NSC (this may just be "questions are read for 11 hours and he answers many of them)

Re: ACFNATIONALS - A JRPG tournament

Otherwise, I really enjoyed this tournament and was glad to play it and get possibly my all time favorite buzz. Similarly to mike Cheyne I declined to play playoffs because I was falling asleep at the buzzer

Re: Your Lowest Point

I once lost a match to Dylan Minarik partially because I said "triwizard tournament" for a tossup on what I think was the ryder cup. So there's that. we ended up winning our quarterfinal match against LASA at HSNCT, but my team has never stopped giving me shit for negging a tossup on &quo...

the return of AHAN wrote:I know that Barrington HS has reserved a spot for PACE. HSNCT bumps up against final exams and they're not jazzed about having that sort of conflict.

yeah that would sure be a shame

Now that this is a real tournament, will the writers be paid?

christino wrote:I will once again inquire into the existence of a regular-minus event in the fall; if it's not happening, I would encourage someone to pick up the effort.

Be the change you wish to see in others

How were the playoff assignments made?

Steven Hines wrote:Anyways, the tournament goes well up until we play against Loyola in playoffs and lose - we got demolished on every category except science and trash.

Cheynem wrote: I do think there was some overly specific trash answerlines (a supporting character from Phoenix Wright?)

Could I see this tossup out of pure vanity

A few stylistic things that bothered me while reading: I agree with Jonah on the quizbowlese in this set; in particularly WAY too much "identify this so-and-so". This might just be a pet peeve of mine but "name this so-and-so" will suffice in pretty much any situation and is easi...

Auburn B's top player is actually one Steven Vo, with Usman playing on Auburn C for several tournaments. My apologies. Replace Auburn B in the rankings with Auburn C, with the same comment. I also intentionally left out IMSA B as their roster is inconsistent and Salij may be on the A team going for...

As I'm bored and always relish the opportunity to steal Dylan Minarik's thunder, here are my thoughts on Illinois quizbowl post-first semester: Top Tier: Auburn Evan Pandya has had a meteoric rise over the course of the season: 10/5: Earlybird, 47.73 ppg en route to third place behind Stevenson and ...
Search found 145 matches